Now it’s time to talk about What most in competition BBQ consider the Holy Grail, The Brisket, Brisket is a challenging cut to cook. If not done right it can be dry and tougher than shoe leather. But when it is done right, it is one of the most flavorful cuts from the beast, in my opinion. The word Brisket originates from an old Norse word meaning Cartilege. Hence the chance for toughness. When you buy a brisket I would recommend buying a whole packer brisket:

You will have to cut this yourself if you buy it from A place like Sams. However if you get it from a butcher, they would probably separate the point from the flat for you. These are the two muscles that make up the Brisket:

The fat layer “c” is what separates the two muscles. The point will have a higher fat marbeling than the flat. Personally I like to Smoke the flat and save the point for making Corned Beef and pastrami. Two topics I will write about later.  Once you have the point and flat separated, I recommend trimming the fat cap down some. There should be no more than a quarter inch of fat left.

Okay, you’ve got your brisket flat trimmed and sitting on your board, now its time to season it. Here is the spice rub mix that I use:

Now, Like the Pork Shoulder from earlier, Brush the entire surface area with some yellow mustard. Then coat evenly with the spice rub. Put the meat into an airtight ziploc bag, and refrigerate over night. Then go set your alarm clock, its going to be another early morning. You’ve got about 12 hrs of smoking time ahead of you. The earlier you get started the earlier you can stave off the hungry mob that will be gathering to consume your masterpiece.

In the morning Take the brisket out and set it on the counter to come up to room temp while you are getting your smoker ready. Once your fire is ready and you have the right temp, 225-250 degrees , Place the Brisket Fat side up onto the grates in about the center of your cooking surface. Don’t forget the pan underneath with apple cider or apple juice. Close the lid and like with the pork, walk away for about 2 hours. Use this time to make your basting liquid to fill your spray bottle with. For this baste I just use apple cider, and a little olive oil mixed together. Start spraying about every hour after the first 2 hours have passed.

Here is where it gets tricky. Brisket has a tendency to stall at a certain temp for a while when cooking, and it will sometimes remain at that temp for several hours. Don’t panic. Just be mindful that after about 6 hrs at the same temp, it will rise rapidly after that, so have your instant read thermometer ready and check often. You are looking for a target of 190 degrees. 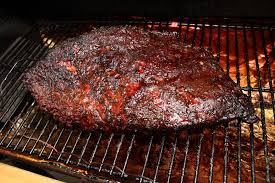 Once you get your target temp, pull from the smoker and wrap in foil, then wrap in a good thick towel. Put this package into an ice chest and let it set for about an hour and a half. It will not lost much temp, if any, Like with the pork unwrap the meat and save the juices that have gathered in the foil. Place the Brisket on your cutting board and slice with the grain. You want about 1/4 ” slices.Some like to chop it up into small chunks, I prefer mine sliced. Put a few slices on a plate with a side of my BBQ Beans and some Coleslaw, and drizzle some of my BBQ Sauce over it and you’ve got yourself a meal. 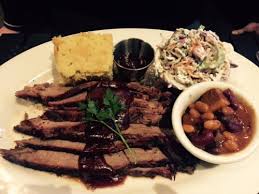 Another good go with item for this is my Mac and cheese recipe.

Cook from the heart, Taste the love